In order to make users more knowledgeable about Windows 10, we share with you information concerning the Windows 10 system size on the hard drive and SSD, as well as system drive capacity.

Are you experiencing difficulties with finding enough space on the system disk? So, now is the time for you to install a hard drive with a larger capacity on your computer. So how do you go about choosing a hard drive in terms of capacity?

When you purchase a new hard drive, how do you move the Windows system to keep the Windows license, installed programs, Windows settings, and your personal files? This tutorial gives you the answers.

Note: A backup of the system drive is recommended before performing the transfer, to prevent any possible loss. 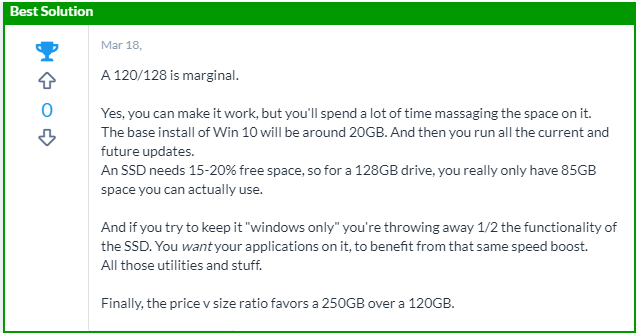 How Much Storage Does Windows 10 Take Up On The SSD?

Microsoft often sends out prompts about updated Windows 10 systems. The amount of space needed depends on the update’s type. For example, patches and service packages require a few hundred megabytes or less.

For that reason, it is recommended that you have at least 10 GB of free space before installing the Windows Update.

Nowadays, a lot of people are choosing SSDs as their system drives because SSDs run much faster than conventional hard drives. If you want better performance and less boot time, it makes sense to go for an SSD.