It has posited a great opportunity for marketers to use this technology and generate path-breaking results effectually. If you are a social media marketer and haven’t been exploiting IoT, this article will convince you to do so without fail.

What is IoT, and what does it do? 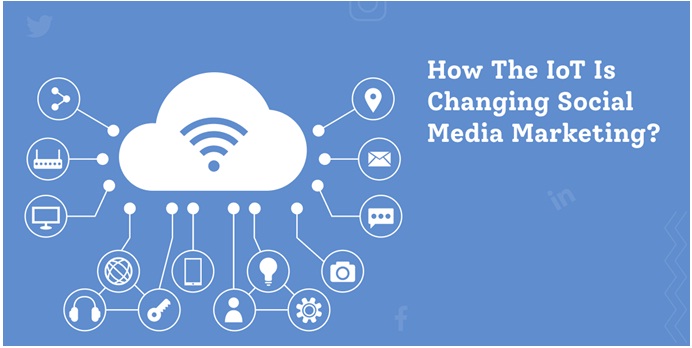 Before we go any further, let us first understand what IoT or the Internet of Things means. It is a system of interrelated and inter-connected objects that can exchange data over a wireless connection without any human intervention.

In simple words, it keeps us connected 24×7. The real-time notifications and alerts are also made possible through it. The experience of using social media will not be half as seamless as it currently is without IoT.

The Need for Social Media Marketing

There’s nothing much to explain here. The results shown in the past few years speak for themselves. Still, if you are a digital marketer who is still focusing on just Google Ads and SEO, you should read this part.

No growing start-ups have funds just lying around, right? Social media marketing has been the most efficient with incurring of low costs, that too by dedicating minimal time.

Through focusing on organic reach, one can see results without laying out a penny. The paid forms like advertisements are still cheaper than other platforms as compared to the benefits availed.

If anything establishes significant credibility for the brand after television advertisements, it is being active through their social media handles.

In fact, several brands like Zomato and Xiaomi have only relied on social media marketing for building the great brand value they stand at today. They launched their TV commercials only much later on.

Plus, the resources needed are much lesser than for television advertisements. Thereby, it is very efficient for building brand awareness.

Apart from brand building and other benefits, social media marketing also enhances the SEO rankings for the website.

SEO rankings are mainly affected by two factors, on-page, and off-page SEO. In off-page SEO, google considers the traffic originating from other sources and the user’s time on the website. More the time spent, the better becomes the ranking.

A great ad-campaign or a strong social media presence can push the ranking through this big time. It is one of the many benefits of marketing through social media.

Now that we have understood the meaning of IoT and have also thrown light on the importance of social media marketing, we can jump to the article’s center point.

IoT has considerably eased numerous things, and covered below are a few of them.

Although the world consists of more than 7 billion people with unique traits and personalities, everyone wishes to have a personal touch on their feed.

IoT has made the prospect a reality. The ads are targeted taking into account the user’s data collected. It gives the marketer a peek into the consumer’s lifestyle. It also makes the ad customer-centric, and they feel valued. Plus, it also increases the chances of conversion.

IoT plays the primary role in collecting the consumer’ data. Everything from their bedtime, their scheduled appointments, and what food they order for lunch can be known collectively and broadly for a set of customers.

Analyzing the trends, one can predict their next requirement and develop a strategy around the same. It can prove as successful as displaying a Kwality Walls ad when the user is craving ice cream.

The target of every ad campaign is to make the viewer click on the call to action. If the advertisement is shown to someone for whom it is not relevant, the efforts will be in vain. It will be like trying to sell makeup kits to guys.

IoT, having collected the data of users, prevents the same from occurring. The ads are only pushed to people who might be interested in the product/service. The advertisement thus achieves much better results.

The good old days where people waited every weekend patiently for an episode of their favorite tv series are long behind us. Nowadays, Millennials and Gen-Zs want instant gratification. Even a few minutes of delay can lead to the loss of opportunities.

Well, again, IoT has come to the rescue. IoT can deliver updates in real-time without even a moment of delay. With that, this technology will build the shopping cart automatically for you down the line, and you can sit back and chill.

With the advent of technology, almost anything online can be automated with ease. But man is a social animal. We long for the human touch on things, which makes them more relatable and compassionate.

The Internet of Things has surprisingly mastered both the tricks. Automation saves you time. And through tons of behavioral observations of the users, it can still converse with the user like someone who knows them.

It has transfigured into spectacular results with the utilization of the least resources, thanks to the next-gen IoT development companies who have made this possible.

The future of IoT beholds even greater innovations and surprises. A fascinating prospect is of socializing with physical objects.

Through that, one can easily interact with objects using their social identity. For example, recently, Appirio launched a vending machine where users had to tweet from their Twitter accounts to get the vending machine’s products.

The experiment was very well-received by the people. With time, more such innovations are expected, which will revolutionize social media marketing to the next level.

How IoT has affected our lives has been prodigious and fascinating at the same time. With umpteen scopes for innovation, we can expect many more such innovations over time.

Hence, it is better to conclude by stating that the best time for using IoT for marketing might have been yesterday. But the second-best time is today!